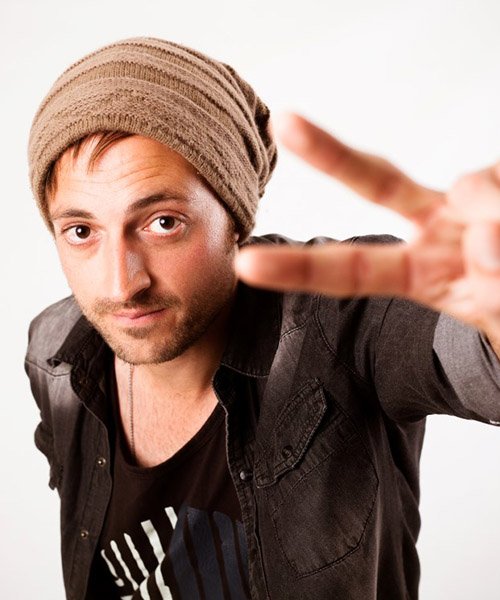 Ask Howie Combrink to describe the music on his debut solo record, Eat It While It’s Hot, and he laughs.

“Acoustic funk reggae folk?” the multi-instrumentalist offers. You can tell that Combrink reaches for this wide-ranging description only when pressed because really, for him, it’s just music, the thing he’s loved doing since he began playing the drums as an eight-year-old kid.

But listen to the 11 songs on the album, released in November 2014, and you’ll not come up with better catch-all for Combrink’s long-awaited debut.

From the gently exhorting “Change” (“we’ve got to change the world today”) to the uncomplicated love song “Don’t Be Sayin’ Goodbye” and the irresistibly optimistic “Take It Easy”, Combrink effortlessly grabs from a range of genres to create a sound that’s distinctly his own.

The result is an album that – like much of say Jack Johnson’s output – is the perfect antidote for a bad day; the kind-of record you can slip into your car’s sound system after a crushingly awful day at the office and know everything will feel ok when you finally get home.

Which is not to say that Eat It While It’s Hot is a throwaway pop record.

As you might expect from one of South Africa’s most accomplished and hard-working musicians, the production is world-class, serving Combrink’s mature songwriting with intuition and flair (he cites The John Butler Trio, Matt Corby, The Dave Matthews Band and Ben Howard as influences).

In fact, Combrink went all the way with Eat It While It’s Hot – producing, recording and playing all the instruments on the album during a stint at The Hit Lab, co-owned by Prime Circle’s Dale Schnettler.

“It was important for me to define my sound by myself and sit in studio alone and let my ears, emotions and thoughts go wild without any outside influence,” Combrink says of this 360-degree solo approach. But, like his free-ranging feel for genres and instruments, self-producing isn’t set in stone for the artist. “The next album I think I will approach a producer and see how it goes,” he says, looking ahead to the future of his solo career.

Until now, Combrink has been one of South African music’s best-kept insider secrets.

Since mastering the drums as a youngster and the guitar as a teenager, Combrink has played with many different bands, starting with Mel-Funktion and including Gang of Instrumentals, Chili and Lime, Soil 7t7 and One Day Remains. He was also a member of the SAMA-nominated The New Academics and still works with former member David Baudains. At the end of 2009 Combrink broadened his performing experience, playing drums and tuned percussion for several theatre shows including The Boys in the Photograph, Dreamgirls.

Early in 2012, Combrink joined multi-platinum selling band, Watershed – and three years later, he still works and plays in the band as well as performing as part of Craig Hinds’ solo line-up.

“I am still very much a part of Watershed,” confirms Combrink. “It’s an absolute honour to be a part of the band and the new album we are currently busy writing. Craig and the guys have been so supportive of this project, which I will release and tour while still being actively part of Watershed. In fact the album’s title came during a car trip to White River with Craig and James (Sunney). We were discussing songwriting and somehow that name popped up as an album title.”

Still, Eat It While It’s Hot is very much Combrink’s solo affair.

“It’s the voice of one person entirely,” he acknowledges. “I recorded and produced it myself so it’s literally an extension of me as a person and it shows a lot of who I am as a person and my personality. I believe many years of being a drummer backing all kinds of artists locally and now being a frontman is what gives this album a story and the emotion it has. It’s a touch out there but so worthwhile, knowing I have the opportunity to work as hard as I can to get it out there. I never want fans to feel like they have not being given the experience they deserve. It’s a happy album and hopefully it sparks all the right happy hormones in everybody that listens to it.”

It’s not surprising that there’s a carefree, happy, summery feel running through Eat It While It’s Hot’s slate of songs: it was on his first trip to the Seychelles that Combrink found his own sound. “I have been writing songs for many years but I just could not pinpoint what genre I wanted to do. Being on the island was such a life-changing experience. It totally inspired me to get writing on the acoustic guitar and played a part in me wanting my first album to have a bounce and a good feeling.”

2014 has seen Combrink release his debut single “Don’t Be Sayin’ Goodbye”, achieving radio success on stations such as OFM, KFm, RSG and more, along with performing with great local acts such as Jeremy Loops, Gangs of Ballet, Michael Lowman and Bouwer Bosch. “Change” is the second single from Eat It While It’s Hot, and was released at the end of September.

Whether it’s singing about South Africa (“Crazy Minds” and “Change”) or affairs of the heart or even life, Combrink’s melodic material – his own brand of “acoustic funk reggae folk” – is absolutely all about good feelings. Check it out.